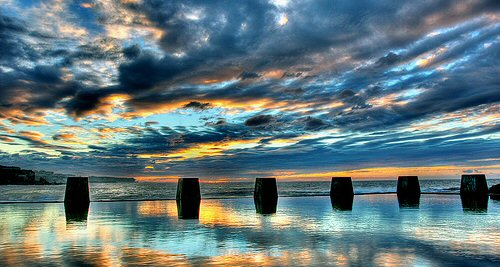 You know those nights when you’ve been out having a wild night in a club, come back to a house party with some close friends, and continue on until late into the next day… It could be 5am, 7am or even later, the darkness has subsided, sun is coming out, the party is settling down, yet the mood is still warm and happy, just more chilled and relaxed than the mayhem that was being unleashed a few hours earlier. The need for big pounding baselines has now past, and what is called for now is a more chilled out, laid back and subtle selection of smooth and relaxed yet upbeat, nice, warm sounds.

“Beautiful Morning” is for just these times. A very special collection of tunes I have put together, a mix of styles from everything to house to techno – some tunes that individually would not necessarily be out of place on way more hard and chunky sets mixes, but pieced together selectively to be the perfect soundtrack to the moment.

I’ve been into electronic music for about 10 years now. Before that I was into metal and rock, but as soon as the rhythm of house got into my blood, there was really very little for anything else. I’ve always been pretty close minded compared to others when it comes to the variance of music styles. I like what I like, but no much else… Electronica is absolutely vast when it comes to sub-division of different genre’s, but really I’ve always been pretty much into the same stuff; mainly ‘House’ and it’s many variants. Funky, Deep, Progressive, Disco, Electro, Tech and Tribal have always been there, and there was almost no need to go anywhere else… Until now.

The most recent and significant progression of my musical tastes, is my recent exploration into the realms of Minimal. “Minimal Techno” or “Microhouse” as it is sometimes known, is a more recent spin off from the well known Techno genre, focusing on the more basic and stripped down repetition of rhythms and beats, somewhat lacking in the melodies tha are moreso found in House and Electro. The thing is that only about 18-24 months ago, being the big music snob that I am, I hated anything of the such, but have more recently grown to be listening to very little else!

There was a very interesting article in The Guardian a few weeks back:

The sound that has been filling those clubs and distributed on those labels, and which has exploded across the continent, is broadly known as “Minimal”. Over the past five or so years, it’s grown from an arcane subdivision of techno into an ubiquitous buzzword on the dance scene. Even two years ago, minimal techno was still the preserve of the so-hip-it-hurts sunglasses-at-night set. Its trendiness was endearingly encapsulated in the ubercoolische.com website, a charming soap opera written about the adventures of minimal figureheads Ricardo Villalobos, Magda and Richie Hawtin. In 2006, minimal finally crossed over, though, when Gabriel Ananda’s 10-minute percussive epic Doppelwhipper exploded across Ibiza.

Minimal is not exacltly going to burst onto the Irish Club Scene any time soon. It is much more suited to dark and dirty underground Berlin clubs at 5am, but it has grown so much on me that I listen to it most mornings on the way into work…