This rocks: Google has been working on a secret project to enable cars to drive themselves. I shit you not! And they haven’t done it on a computer simulator, or in some controlled lab, they’ve been out on California roads testing this out.

“Our automated cars, manned by trained operators, just drove from our Mountain View campus to our Santa Monica office and on to Hollywood Boulevard. They’ve driven down Lombard Street, crossed the Golden Gate bridge, navigated the Pacific Coast Highway, and even made it all the way around Lake Tahoe. All in all, our self-driving cars have logged over 140,000 miles. We think this is a first in robotics research,” 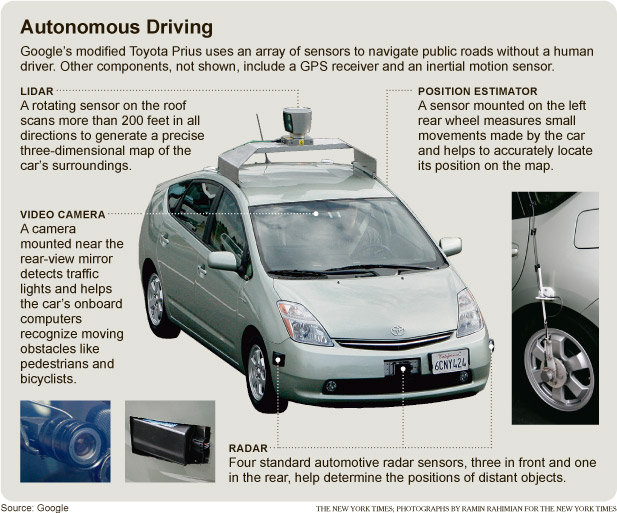 So how does this work? The automated cars use video cameras, radar sensors, and a laser range finder to locate everything around them (these are mounted on the roof). And, of course, they use Google’s own maps. But the key? This is all made possible by Google’s data centers, which can process the enormous amounts of information gathered by our cars when mapping their terrain.

Google says it gathered the best engineers from the DARPA Challenges (an autonomous vehicle race that the government puts on) to work on this project. They also note that these cars never drive around unmanned in the interest of safety. A driver is always on hand to take over in case something goes wrong, and an engineer is always on hand in the car to monitor the software. Google also says they’ve notified local police about the project.

So has it worked? Apparently, yes. There has been one accident so far, but it was when someone else rear-ended one of these Google cars.

Google notes that 1.2 million people are killed every year in road accidents — they think they can cut this number in half with the tech. It will also cut energy consumption and save people a lot of time.

I want this yesterday. This is all kinds of awesome.