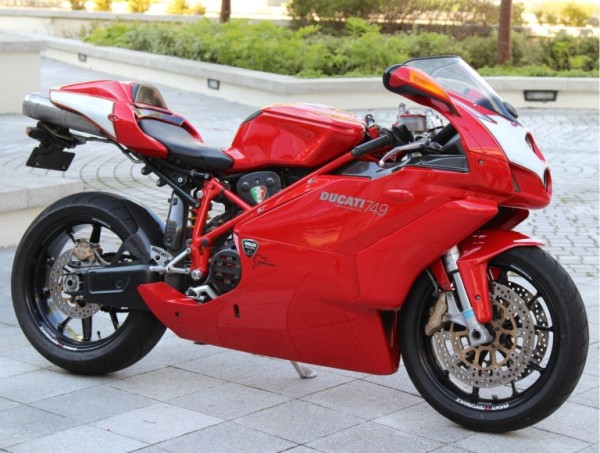 I thought I should probably write a review of the bike I’ve had now for 2.5 years. When I was buying it I did not find much in the way of real world reviews so hopefully this can be of some use to anyone who is considering buying one… And in short, yes, you should – it’s brilliant and I could not recommend it enough! Anyway, here is some background.

I did not originally intend to buy a sports bike (this is classed as a midrange superbike) I was looking for something more in between, but most of those types of bikes are pretty ugly and just not special. I considered this and when i rode it I was surprised how nice it was and easy to ride. I’m pretty short and it was not too big – but if you are 6 foot plus it might be on the small side.

So, firstly, I love this bike, its my pride and joy and the best thing I’ve ever bough out of all of toys. Mine is a 2005 which may be old but it has never low mileage and the guy who owned it before me put loads of nice little bits on it like carbon and other shiny bits. It was remarkable value for what I got I think. And going on market prices it has held its value very well.

For a superbike it’s surprisingly easy to ride in traffic – I hear the 1098 is a total bitch at low speeds. I ride mine to work every day through the city and it’s great. It has more than enough power – scares the crap out of me over 9k rpm and can spin the wheel in 3rd when accelerating hard. Two different Ducati mechanics told me that The 749 is a great bike as you can give it a bit of a thrashing – whereas it’s bigger brother the 999 ‘tends to run away with you’. The front brakes are fantastic – it seems to defy gravity when you throw down the anchor. (The rear brake not so much though). The steering is also brilliant, it goes exactly where you want to put it. Despite revving to 13k rpm it’s surprisingly grunty in low revs – that’s the twin engine for you. Mine has an open clutch and a racefit exhaust so it sounds incredible (see video below) but it still sounds good with standard exhaust. It’s an absolutely stunning looking bike which has really stood the test of time. I read when it came out a lot of people did not like it – maybe ahead of its time but 8 years on and most people still think its a brand new bike and cannot believe how little I paid for it considering how much you get overall.

The most annoying thing for me is when riding in the city on a hot day, your ass gets absolutely roasted as the exhaust pipes come up under the seat. I’m told there is little you can do about this but if anyone knows please let me know in the comments. Comfort wise on very long journeys on windy roads like this, your wrists and arms hurt. But it’s fine at higher speeds with the wind to take some of the slack. The fuel tank is too small – well under 100 miles per tank. Mpg’s aren’t great either – here is mine tracked on Fuelly. The rear brake is next to useless. Reliability wise it was been ok for me, but for some reason it occasionally loses charge in the battery. Not sure why but apart from that I have had no problems with it. Mine I’m sure some think is too loud, it’s a bit obnoxious but I quickly grew to love it –  here is a video:

I hope this helps if you are considering buying one. Leave any comments with your thoughts.