This is very interesting. This chart shows the breakdown of income distribution of the population of Ireland. Some fairly surprising numbers here… 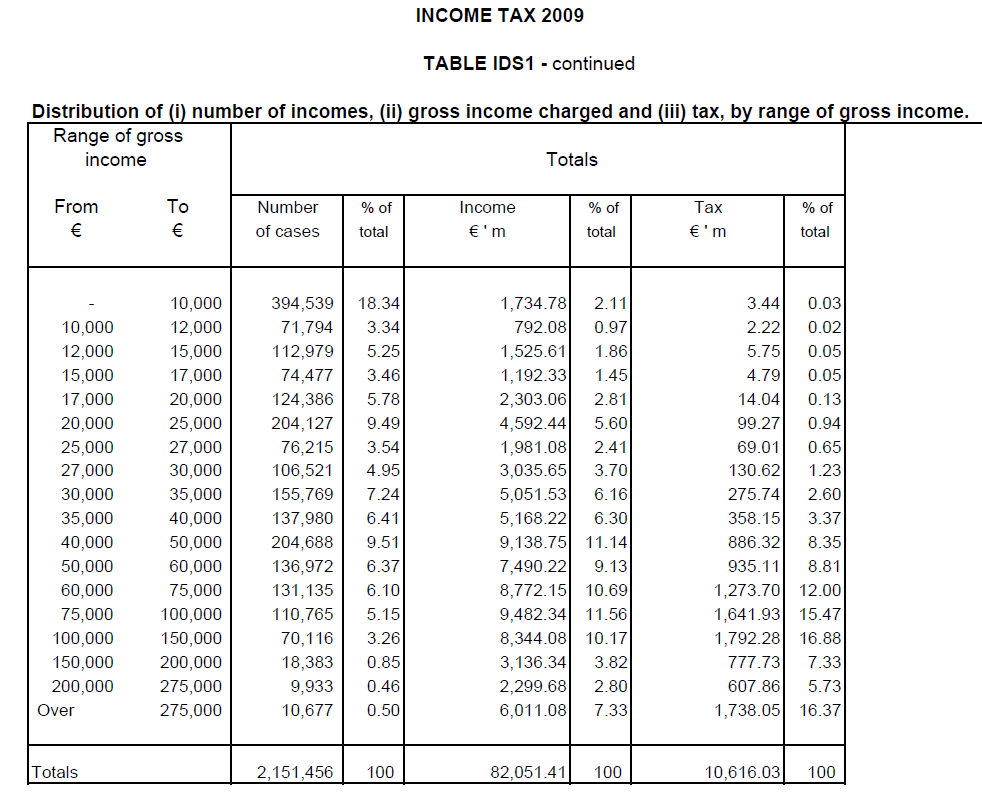 I had heard this phrase being bandied around the web for ages – took me a while to grasp what they were taking about, but I saw this video just now which explains it quite well.

I’m finally recovered from what had to be of of the best little Irish festivals ever. No Place Like Dome or NPLD is a very small music and arts festival in Sligo, this was its second year ever and it was a great success. It was organised by a small group of friends who just thought that Ireland needed something new and fresh on the festival scene. basically a bunch of lads went to Burning Man in the US and were so blown away they wanted to do something similar in Ireland, and they did just that. The first year was a tiny 250 people, so basically a big extended group of friends, and this year it was expanded to 600 – but it still felt really small and intimate. It’s basically anti-commercialism so you cannot buy anything there – you bring everything you need and you barter for anything else – or basically get given it as it happened as everyone was so friendly. Tickets are cheap at €80 but you get lots for your money.

Myself and the Laundry DJ’s were delighted to be asked to play at it this year. We had just played at Life Festival 2 weeks before and that was a truly incredible weekend, I can’t remember having had so much fun. NPLD was quite different, also great fun but it just had something a little more special. It’s super relaxed atmostphere made it feel more like a big friends party than a commercially organsied event (and in one way that’s exactly what it was). There were loads of great bands and DJ’s all playing for free, such is the spirit of the gig. There was the main dome, the Bass Bunker which was absolutely brilliant – a fantastic place to play a DJ set, a Liquid tent as seen in Life Festival with a Funktion One system, and then the accoustic stage where they burned a big campfire to keep everyone warm at night. There was also a set of decks set up in the Tea Station – a little hut where they gave out free tea and chocolate to everyone!

All in all a fantastic weekend and I cannot wait for next year! Here are a few random pix I found online, I’ll try to add more soon

I was just on a weekend away down south, and here are a few photos I took:

On this tiny little dirt road, apparently our often overprotective government, think its perfectly ok to do up to 80kph while driving on it. I’m a pretty quick driver but I don’t think I would do 80kph on this road. After this straight it gets pretty twisty and downhill – I drove down it at probaly not more than 30kph or so. Doing much more would be a but silly, and that says a lot coming from me! ;)

However, this photo taken above, on the same day, shows a very wide, smooth, straight, 2 lane dual carriageway – which apparently they think its unsafe to drive more than 60kph – 20kph slower than the one vehicle wide dirt road.

Now yes, they are temporary signs – but regardless – it’s ridiculous – how in the world do they expect us to take them seriously? Where is the sense in this? For a considerable amount of time there were parts of the M50 where they set a speed limit of 60kph – 99% of people completely ignored it and went 100kph or so anyway. Completely defeats the purpose really. Why can’t we have some sense applied to the roads in this country?

Enough of all this recession bullshiiiiit – let’s concentrate on the FUN things coming up. It’s now (apparently) summer so tome to get out in a field with a tent and get messy with your mates to comer quality tunage. No better place t do it than Electric Picnic. I’ve been a good few times before and its always a fantastic weekend. The lineup does not exactly blow me away this year but I have been both Orbital and Basement Jazz before and they are usually great to watch.

Really to me it would not matter who is on, you have so much fun just being down there regardless of going to gig’s – its worth going no mater what.

Oxygen actually has a pretty good lineup but you would not catch me down there with the tent blazing pikeys!

This is the queue last week on Stephens Green when the convenience store Londis advertised some jobs for some new stores opening this year, and had an open interview day. Applicants were forces to queue on the street outside which snaked all the way around to Grafton Street. It really is a throwback to the 1980’s – just check out the video below!

There were 100 jobs advertised but they had over 100 applicants. People from all walks of life – much like when a few months ago, McDonald’s advertised a new store opening in Ennis and got 500 CV’s – many from Bankers and Accountants!

Taxi men in this country get a pretty bad rap. There is never a shortage of people complaining about them on the various radio stations, or on one of the many message boards in Ireland. Sometimes I think a bad reputation can hang around for an unfair amount of time, and I think they suffer from this because of years past. I vividly remember the countless hours I have spent trawling the streets of Dublin in the small hours of a Friday or Saturday night waiting for a taxi. Back then the numbers were small in comparison to today and getting one was next to impossible unless you walked far out of the city – or you were just lucky.

Thankfully today it is different and there are many more taxi’s on the roads, so it is not so much of a problem. Actually the tides have turned now and it’s the drivers themselves that do the most amount of complaining about not being able to make a decent living.  It’s called a free market and competition lads, deal with it.

Anyway I could go on and reinforce many other people opinions about why they have a bad reputation, but I’m not – I’m just going to talk about the one that pisses me off most: their frankly appalling standard of driving.

Now please let me state that I may be making sweeping statement here, but I am not trying to slander every single driver. There absolutely are some very good drivers out there, but unfortunately they are by far the minority. I do a fair bit of driving on the roads of Dublin in both and car and on a Motorbike, and it really amazes me how when I see some bad driving on the roads, a massively disproportionate amount of time it is a taxi driver.

Honestly I am just amazed at how these people’s actual profession is Driving, yet they seem to be worse than most of the rest of the people on the roads – which really isn’t saying much to begin with. Taxi’s seem to think they have their own set of rules different from everyone else, and make no apologies for it.

What i see most is the following:

I think there should be several people who’s job it is to ride in taxi’s and mark their driving ability. If they are not diring properly their permit should be suspended until they get lessons.

About 9 months ago I watched a fascinating documentary on RTE1 called “Future Shock Property Crash” – a frank and honest report by an Irish Journalist called Richard Curran, about what he saw as being an impending properly crash – far worse than the “Soft Landing” that the banks were preaching. the cracks in the market were already starting to show, but he predicted that house prices would falling by up to 40% from their height in latest 2006 – and that it would happen very quickly. He also went into detail about the ramifications of this event.

At the time I was contemplating the thought of buying another property – and I think this cemented my initial gut feeling that the risks were just too high and that I’d be better off staying put for the moment. Boy am I glad I didn’t. END_OF_DOCUMENT_TOKEN_TO_BE_REPLACED

I think this video sums it all up…

A fantastically simple yet effective piece, not exactly what you’d call politically correct though! I love it though – kinda South Park Esque…

I’m very happy and thankful to say that 2009 is looking good for me, and (afaik) my job is pretty safe. but its really scary too see what is happening to the people around me. I’ve been out of college and in the real world for about 6 years now – I completed a three year degree and was beginning my career in as short a time as possible. However I know quite a few people who stayed around the college scene, getting a string of further qualifications which promised to make them infinitely more desirable to the market, meaning they could climb the ladder to the big bucks at a far more rapid rate. unfortunately with the times that are in it, this probably did not pan out to be the wisest decision to have made. Often in times like this, real practical previous experience is valued more highly than raw qualifications. People are even saying that MBA’s are just not worth it any more -And that was before we entered a recession! END_OF_DOCUMENT_TOKEN_TO_BE_REPLACED

I remember the day i saw my first ever flatscreen TV. It was upstairs in the old electronics division of Brown Thomas, where they had all the best and most expensive (ripoff) new products.

It was a 42″ which may be pretty commonplace today, but it looked as big as a cinema screen to me at the time – probably because I was about 12 and probably no more than 4 feet tall ha ha ha…

Anyway, if you so wanted to be an early adopter of this fantastic new technology, you could walk out of there with one under your arm, for just a penny less then IR£12,000! Twelve Grand! You’d have to me mad! That’s like a bazillion Euro in our new monies today!

Thankfully, things are different now and there are some properly savage deals on tv’s right now. If you are in the market you’ll be very glad you read this…

Like I said in previous posts,you’d have to be mad not to buy from the UK and take advantage of the great Sterling exchange rate!

The two sites which I have found the best deals on are: